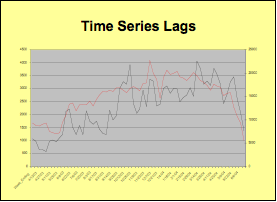 Over the past several months, I've received more RFIs and RFPs for marketing mix optimization / media mix optimization than I had received over my entire career up to this point. This could we've been doing a better job marketing ourselves, but I think it's something deeper than that. My hunch is that mix optimization is the "new CRM" and that, as with CRM, expectations are an order of magnitude too high.

So what is media mix optimization when you strip away all the trimmings? Essentially, you're trying find relationships between stimulus and response data using regressions. The data are typically arranged in time series. In consumer industries (CPG, retail, telecom, etc.) companies have been doing mix optimization since the early 1970s, so much so that is has become essentially commoditized. Once you have the algorithms built in a stable business, it becomes a largely plug-and-chug exercise.

So why is B2B marketing so late to the party? I see three main reasons.

2. Long sales cycles. In consumer industries, transactions can hit financial systems minutes after a television ad is aired. In B2B, the effects can take months.

3. More dynamic business models. B2B industries typically undergo major transformations every couple years or even every year. For example, Microsoft's continuing product launches make it difficult to separate out the "marketing signal" from the other stuff.

These three factors make it pretty tough for B2B marketers to really optimize their mix. But, instead of starting slow, most companies seem to be trying to do everything at once.

I see four steps to getting to true B2B mix optimization. Each step can take months or even longer.

1. Understanding total spend on marketing and automating. Many B2B marketing orgs still do not have clear understanding of their total spend / stimulus to the market. Efforts to aggregate it tend to be manual, because data in accounting systems are not aligned with business taxonomy. So, before starting a big mix optimization program, it's pretty important to a good automated view of spend and stimulus across all marketing vehicles.

2. Establishing causality. Before starting to do mix optimization, it's nice to know what's causing what. Most marketers know the ROI for direct response marketing--at least they think they do. However, they have no idea what effect "above the line" media is having, or the interaction effects between different kinds of media. This is typically step 1 of a media mix project. You need time series stim-response data to establish what I call "linear causality".

I have a hunch, though, that a lot of companies don't understand this. They're getting promises from vendors that they can get to step 4 in a couple months, and skipping over the basic blocking and tackling to get there. In my next post, I'll talk more specifically about the vendor landscape and a recommended conservative approach to tackling mix optimization.

Posted by Andy Hasselwander at 10:11 AM