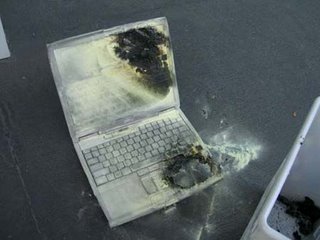 Chris Anderson had this great post on "the mainstream media meltdown" which was also referenced by Eric Kintz here. What's interesting to me is not whether mainstream media is disappearing (it is but I think it is being replaced equally well by other more measurable company generated media types), but how to measure the effectiveness of its replacements. There are two kinds of "new media communication"--that generated by companies and that generated by their customers. This post is about the second type.

What makes this discussion even more relevant right now is that a lot of big companies are engaged in B2B marketing metric definition projects today. Words like "taxonomy", "hierarchy", and "input-output-outtake" are rampantly floating around the halls of corporate marketing organizations. It's pretty easy to define metrics for things like television, radio, print, or "company directed online". Example: for television, we can look at GRPs or TRPs at a DMA level or at a PRIZM level to get an idea of how many people we touched. We can then use these data in a time series against sales or leads to understand how TV drove behavior. But, how do we measure customer-generated things like "consumer buzz" or "blog buzz"?

First of all, these consumer generated media channels are far more relevant for some businesses than for others. Companies that are constantly innovating (high tech, pharmaceuticals, for example) are much more vulnerable to consumer generated media than those that aren't. It's unlikely that people are going to be actively blogging about the latest Kenmore dishwasher, for example. But, the consumer-generated buzz around software releases or exploding batteries is huge. What it will boil down to for companies like these is that we will need to actively harvest this information on a daily basis and use it inform not just their marketing organizations but their product development organizations. This great example points to how Wall Street traders are using "blog intelligence" to essentially forecast the price movements of securities.

Conclusion: Companies will need to measure consumer-directed media aggressively and respond to it both with their own marketing communications (e.g. PR) and with responses in the actual product and offering.
Posted by Andy Hasselwander at 9:43 AM