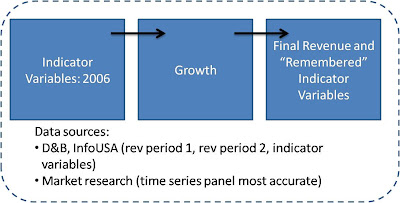 A lot of companies are looking for ways to find the highest potential customers and cover them more aggressively. This is really a key tenant of predictive modeling in the B2B arena--if you can find the customers that will grow, and get them while they're small, you'll ride the curve up with them providing you can keep them loyal (a whole other conversation).

The challenge with this is two-fold. First, you have to find the data to do the modeling. Second, you need to understand the right independent variables that predict future growth. This type of modeling can be done for either Enterprise or SMB, but I think it's got the most potential in SMB.

This study could either be a time series study where we're asking the same companies year after year (most accurate), or we could ask people to "remember" what their revenues were in the past. The trouble is, we'd also need to ask them to "remember" what the predictive variables had been, as well, which is really hard and will probably be biased and wrong. So, I'd definitely recommend implementing a year over year panel. Yes, this screams out for a syndicated data approach.

Once we have our data set, we can now do our modeling. The basic approach is a predictive analysis like multivariate regression, where we use year-over-year revenue growth as the dependent variable, and we use a bunch of other firmographic variables as predictors. The key is finding the right predictors. What are some predictors we've seen work?

There are ton of other ones that could work, but the key is really getting to an "account growth" scoring algorithm that we can then use as one factor for segmenting account coverage. This can also be used to score partners. For some large B2B companies with literally tens of thousands of registered partners, any approach to distinguish the best from the unwashed masses will be very valuable.

Posted by Andy Hasselwander at 11:18 AM